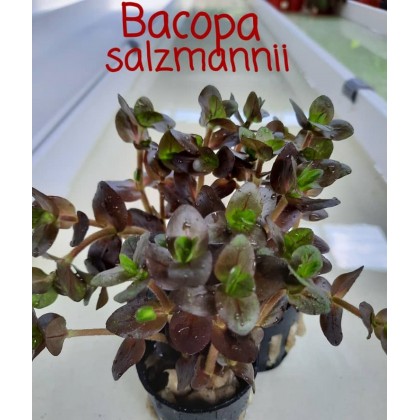 Bacopa salzmannii is distributed from the south of Mexico to Paraguay, where it usually grows semi-emersed on the edges of ponds and the banks of slow-flowing rivulets. This species is quite variable, and today, several groups are counted among it that were originally described as species of their own. The plant brought into the hobby as Bacopa sp. 'Araguaia' is in reality a form of B. salzmannii, formerly classified as Bacopa lilacina (Pennell) Standl.
In the USA, this Bacopa species is already quite well-known, but still not as readily available in trade than from other hobbyists. In Europe, it is totally new, and only singular specimens are in cultivation at the moment.

This species is very much alike the well-known B. caroliniana, and it can be cultivated under the same conditions. It stays somewhat smaller than B. caroliniana, and the midrib of the leaves often has a distinclty reddish tint. Under lots of light, and given that the supply of micronutrients is ample, this reddish line may be less distinct, whereas the entire plant can be of a uniformly green hue under low light and provided with a lower level of micronutrients.
The emersed form of B. salzmannii has a thick, densely hirsute brown-coloured stem, and the flowers it develops grow on a distinctly longer stalk than those of B. caroliniana.
CO2 injection may be helpful but is not absolutely necessary for cultivating this plant in an aquarium.

Propagation is easy, as the plant throws a large number of lateral shoots, be it after trimming or spontaneously.
B. salzmannii is a highly suitable plant for emersed cultivation, mainly due to its highly attractive purple flowers.